simple v’s complex or complicated cysts
to be simple it must be:

ultrasound image- a complex breast cyst:
sedimentary movement may be visible by scanning the patient erect.
fine needle aspiration and cytological assessment can confirm the diagnosis. at the least, a follow-up ultrasound should be performed.

ultrasound image- a simple cyst adjacent to a complex cyst, (confirmed by fna to be a haemorrhagic cyst).

colour doppler should be performed to assess for any internal vascularity.

ultrasound image- the material in this breast lesion is not in the dependent portion, therefore excluding mobile debris or fluid.
whilst it may represent a mural nodule, the neat linear edge suggests likely adherent haemorrhage.
a fine needle aspiration may still be warranted. or at least a 2 month follow-up scan. 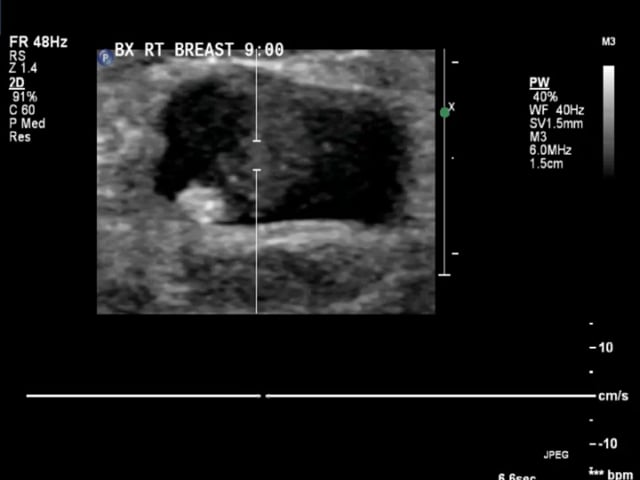 breast milk cyst
a complex, milk cyst in the breast of a lactating patient. the clip demonstrates a jet of breast milk into the cyst. also spectral doppler used to create pressure waves through the contents, proving complex fluid rather than solid contents.

histological confirmation via a biopsy is still recommended. a core biopsy is preferable.

ultrasound image- fibroadenoma:
a phylloides tumour can have similar appearances and be indistinguishable from a fibroadenoma. if the mass is greater than 5cm or rapidly increasing in size a phylloides should be considered even if a fine needle biopsy has suggested a diagnosis of fibroadenoma.

ultrasound of a large fibroadenoma in a 15 year old girl.

presented with asymmetry of breast size.

note the similarities to a fibroadenoma.

whist often benign, their malignant tendency generally leads to removal. multiple papillomas have been shown to carry a far greater risk than solitary.

a document giving a proposed algorithm for management of suspected papilloma.

ultrasound image- a papilloma in a markedly dilated duct.

ultrasound image-the nipple generally casts an acoustic shadow.
to overcome this use either a stand-off pad or thick gel.

you may also see: punctate, micro-calcifications, tethering of adjacent tissues or the mass crossing tissure boundaries.

elastography is also an emerging technique in assisting suspicion levels.

types of breast cancer
**** breast cancer grading and specific differentiation must involve a series of investigations and not be based on ultrasound alone.

as the name suggests, the cancer has crossed multiple tussue boundaries, and is no longer contained in the tissue of origin.

there are several grades using the tnm grading

paget’s disease of the breast

for detailed information on paget’s disease of the breast.

ultrasound image – the posterior shadowing and irregular outline raises the level of suspicion from fibroadenoma to possible carcinoma.

dcis is by far more common than lcis, and more importantly, it should be distinguished as a clearly malignant lesion. ductal epithelial cells undergo malignant transformation and proliferate intraluminally. eventually, the cells outstrip their blood supply and become necrotic centrally. this debris can calcify and be detected mammographically. moreover, the lesions also may be palpable clinically. five pathologic subtypes have been identified: comedo, papillary, micropapillary, solid, and cribriform. most lesions represent a combination of at least two of these subtypes.

the presence of comedo necrosis is an independent risk factor for subsequent ipsilateral breast cancer (nsabp-b17).

the extent of this carcinoma is far more evident on the mammogram.
the peripheral mass and extensive micro-calcification extending towards the nipple is readily apparant.

ultrasound image- an invasive ductal carcinoma of the breast.

infiltrating lobular carcinoma has a much lower incidence and comprises less than 15% of invasive breast cancer. it is characterized histologically by the indian file arrangement of small tumor cells. like ductal carcinoma, these typically metastasize to axillary lymph nodes first. however, it also has a tendency to be more multifocal. despite this, the prognosis is comparable to that of ductal carcinoma.

ultrasound image – an invasive lobular carcinoma invading the latissimus dorsi. this particular image demonstrates the use of harmonics to better define the irregular and  spiculated margins.

this ultrasound was undertaken and was followed with a biopsy the next day. on imaging it was highly suspicious for an carcinoma. it was surprisingly found to a fibroadenoma.

this ultrasound image does not follow the rule of fibroadenomas being wider than deeper in size. it also has an irregular border.

ultrasound image-  it has internal low resistance internal flow.
thankfully it was a benign fibroadenoma.

ultrasound image- male breast gynaecomastia – mild.
a tender (often) lump deep to the nipple with spiculations radiating away from the nipple.
can be unilateral or bilateral.

ultrasound image- male breast gynaecomastia-acute. mildly increased vascularity can be seen.
can be idiopathic, related to steroid abuse or associated with hormonal treatments such as prostate cancer therapies.

the implant should be anechoic with well defined margins. folds are commonly seen in the implant surface.

also, small traces of simple fluid will be seen overlying the implant but is contained by the overlying fibrous capsule that contains the implant. this fluid is routinely seen within the implant folds (see image below).

for a link to breast implant types, valves and history

ultrasound image- a normal finding of an implant ‘valve’. also visible in the mammogram below.

the typical appearance of folds in a breast implant.

ultrasound image- most often there is a rupture only of the elastomer biluminal shell of the implant. the ruptured material is then contained by the fibrous capsule generated by the body.

ultrasound image- silicone extruded outside the fibrous capsule. this can be seen as an island of poorly defined echogenic material ,distant to the implant, casting a ‘dirty’ shadow .

ultrasound image- this implant has a large lateral rupture with silicon extruded out (green). this tends to alter the internal silicone also (orange).

ultrasound image- a large siliconoma.
this is a palpable lump of silcone. the cystic space within the silicon is a commonly seen variant.

ultrasound image- silicon has made its way into the intercostal space.

ultrasound image- an acutely ruptured implant.
there is discontinuity of the implant capsule but most of the silicone is contained by the fibrous capsule created by the body.

ultrasound image- old, degenerated, intact silicone implant.
always increase the gain on your ultrasound to examine the ‘quality’ of the implant.

ultrasound image- the left silicone implant had degenerated and burst. here it is still contained by the fibrous capsule.

ultrasound image- a post-operative seroma is not an uncommon complication post mastectomy.

panoramic view of a breast seroma.

a large, expansive breast haematoma adjacent to a breast implant.

ultrasound image- a breast abscess. note the thickened wall and complex contents. if any clinical doubt, aspiration checking cytology and microbiology (culture and sensitivity should be performed).

this condition is sclerosing thrombophlebitis of the subcutaneous veins of the anterior chest wall. it is associated with patients who have had breast surgery such as lumpectomy for breast cancer or breast augmentation.

ultrasound image- it is a small cord like structure/vein which does not have any vascularity.

ultrasound image- it can be very small and extremely difficult to do a panoramic view . a thorough history should be taken from the patient.

ultrasound image- a breast abscess. note the thickened wall and complex contents. if any clinical doubt, aspiration checking cytology and microbiology (culture and sensitivity should be performed).